Let's show you everything local.
Thank you! Your submission has been received!
Oops! Something went wrong while submitting the form. 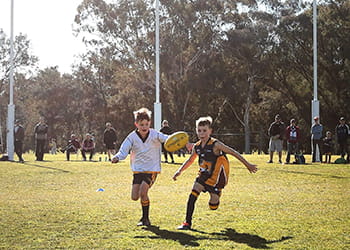 The Riverton Football Club is a sporting icon in Riverton. The Club is an all-inclusive football club for girls and boys aged 5 and up to Year 12. New players are always welcome.

Play footy and have fun!

Riverton Junior Football Club is affiliated with the East Fremantle Football District as part of the Western Australian Football Commission. The club complies with the bylaws established by the WAFC and received recognition for its compliance with these standards in 2012 when it was awarded ‘Champion Club’.

Playing footy at Riverton Junior Football Club has many benefits. Children who participate in team sports develop important social skills, a sense of belonging and camaraderie much faster than kids who don’t.

The benefits of playing AFL include:

Registration fees assist with funds that the club will use during the football season.

Unfortunately we don't have any events for this area available yet. Please go to a different area and scroll through the list of available events to see if there is anything that interests you. Do you want to advertise with us as a business owner or community group?